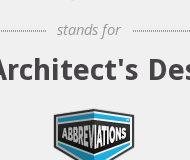 TAD originated at a small architect's office in India in 1989. It is a different approach to BIM (Building Information Modelling) from what you may have seen elsewhere. It is based on fundamental architectural research. It is not a software that was derived from other engineering fields and then modified to suit architects.

Since it is so much in touch with what architects really do, it is extremely efficient in doing it. The file-sizes of this BIM software are literally in kilobytes.

At the same time it has extensive querying capabilities. The architect can actually get objectivity from quite early on -- almost from the bubble-diagramming stages. For example; quantities, area calculations, municipal (local government) calculations and so on. Such capability can even be extended using add-ons (probes)

Model buildings as a set of spaces
We all live in spaces. They are important to us!
When designing, we need to be in touch with the various spaces we use. After all, we are not termites -- who live inside built matter of the walls. An architect is quite interested in knowing how the spaces are inter-related, and whether they would work for our users. The walls come as a bye-product of having made these spaces.

TAD respects such an approach. That is why it is very easy to start designing directly in TAD itself. It is like having a scratch pad handy.

But if you think this is just a bubble diagramming too ... well, it is not. You can  even create the entire model; including the built matter that is present in the building.

What it does NOT do is drafting. For that, you can easily export from TAD and use the regular CAD software that you were using earlier.

Query right through designing
Analyse and get values at all stages. Not just at the final stage of design
TAD helps you iteratively design. Like a potter at work. At any point in time, you can extract objective information such as areas, distances and so on. What is the point of designing a building only to realize at the final stages that some mathematical criteria was not right?

This capability of querying into the design is very powerful. TAD has a built in language called "ARDELA" (ARchitectural DEsign LAnguage) That can be used to create add-ons to provide additional querying functionality. These add-ons probe into your model and provide  you answers.

We would be releasing a marketplace for these probes -- and also a simple way for you to write your own probes too.