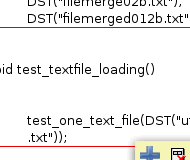 wxWidgets is a C++ library that lets developers create applications for Windows, Mac OS X, Linux and other platforms with a single code base. It has popular language bindings for Python, Perl, Ruby and many other languages, and unlike other cross-platform toolkits, wxWidgets gives applications a truly native look and feel because it uses the platform's native API rather than emulating the GUI. It's also extensive, free, open-source and mature.