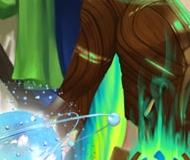 Gamify your classes with ClassCraft: Transform your class into an epic adventure. An adventure that will last the entire course.

Used by +20,000 schools in the United States. | Free for teachers with no class limit.

Classcraft's mission is to make school more relevant and meaningful by creating playful and collaborative learning experiences that teach the whole child.
We believe that the classroom can be reinvented using technology, games and storytelling to create a learning environment that is culturally relevant to today's youth. Your future is likely to be very different from what we know today. We believe that fostering non-curricular cognitive skills such as collaboration, empathy, leadership, communication, and self-expression will be a cornerstone in helping them prepare for the changes they will face as adults.

Why use gamification?
As games are becoming an increasingly inescapable cultural asset, we wanted to explain the role they can play in education and the potential they have to transform the student experience at school.

With the advent of video games, games have gained a lot of popularity as a cultural product. There are significantly more people in North America who play video games than people who watch movies and listen to music. In fact, 58% of Americans play video games, 45% of gamers are women, and 58% of parents play video games with their children to socialize with them. In this way, games occupy an important place in culture. Although Classcraft is not a game, it draws inspiration from other games and its power over learning is very similar.

With that in mind, it makes sense to want to implement a game in the classroom to gamify learning. Teaching consists of linking the course material to elements with which the children are familiar. All the children have played video games - they understand the rules and the same genres in the games and are happy to play.

ClassCraft is available for: