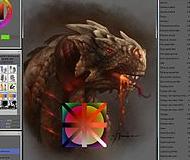 MyPaint is a drawing program for digital artists. The program lets you work with graphics tablets and has a wide range of brushes types which can be extended with the brush editor.

MyPaint began in 2004 when Martin Renold bought himself a Wacom graphics tablet. He noticed that the program he was using would sometimes drop a stroke when scribbling too fast. He thought he could be more expressive if his brush reacted in a different way to pressure and speed.

Martin wrote a few prototypes, and applied what he’d learned in his engineering studies. His simple program grew into a brush editor with a simple digital canvas. In 2006 Martin released version 0.4, and thought it was complete. MyPaint now did everything he wanted it to do, but artists found it and began to use it. Some of them asked for features that Martin also wanted, so development continued. Since then, many more have contributed to the code, or spread the word about MyPaint on the Internet.

Fast-forward to today. MyPaint is a nimble, distraction-free, and easy tool for digital painters. It supports graphics tablets made by Wacom, and many similar devices. Its brush engine is versatile and configurable, and it provides useful, productive tools.

The standard brushes can emulate traditional media like charcoal, pencils, ink, or paint. But you don’t have to limit yourself to just the standard ones. It’s easy to make expressive, artful new brushes that don’t respond like anything conventional.

Fullscreen mode declutters the interface, leaving you with just your brush and your creativity. You can still reveal the tools you want, when you need them. This distraction-free approach means you can focus better on the art you make, not the tool you make it with.

MyPaint has simplicity, yet it gives you all the tools you need to create great artwork.

Many notable artists use MyPaint, including digital illustrator and concept artist David Revoy. You’ll find growing MyPaint user communities on DeviantArt and Tumblr. MyPaint comes from the Linux art world, but it has Mac OS X and Windows ports too. Now anyone can pick up MyPaint and draw to their heart’s content!