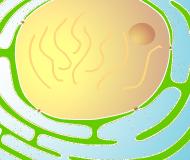 The biologist and educator John Kyrk with a Masters in Biology from Harvard University, has designed this interactive and very educational web on general topics of cell biology, remember that atoms are not visible to the naked eye, even with the strongest support optics. They are beyond visibility, so it does not look like anything. As the author says in his notes "are forces, not objects, but that seems to be the opposite of our intuition." Atoms calls consist of protons around which forces are the forces called electrons.

This web application is free, if you purchase the CD is available for PC and Mac with a value of $ 129 US dollars. It is in 7 languages ​​including English, Spanish, Deutch, Turkish, French and others with detailed explanations and animated processes such as mitosis, meiosis, chromosome structure , the Golgi among others.