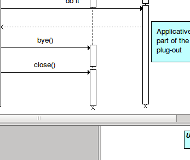 BOUML is an UML 2 tool box developped since several years including a modeler allowing you to specify and generate code in C++, Java, Idl, Php, Python and MySQL.

BOUML is extensible, and the external tools named plug-outs can be written in C++ or Java, using BOUML for their definition as any other program. The code generators, reverses and roundtrips are ones of the pre-defined plug-outs included in the BOUML distribution.

Builtin tools
Some plug-outs, written by hand will help you in your daily tasks: