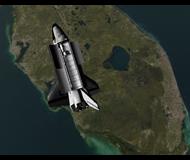 Unlike most planetarium software, Celestia does not confine you to the surface of the Earth. You can travel throughout the solar system, to any of over 100,000 stars, or even beyond the galaxy. All travel in Celestia is seamless; the exponential zoom feature lets you explore space across a huge range of scales, from galaxy clusters down to spacecraft only a few meters across. A 'point-and-goto' interface makes it simple to navigate through the universe to the object you want to visit. Many add-ons and vastly improved textures of high resolution are available for Celestia.

All the movements of celestial bodies and objects are realistic and especially precise and realistic.

You can use the exponential zoom function that will allow you to explore space on multiple scales, from groups of galaxies to the precision of the small details of the fuselage of a spaceship.

The CELESTIA interface is very pleasant to use, since it has a very efficient system that allows you to go to a selected point and visit the entire universe.

Also, Celestia works with extensions. And it is that this program has in its catalog a great variety of stars, galaxies, planets, moons, asteroids, comets and spaceships. If that is not enough, you can also download dozens of plugins that are very easy to install.

Celestia's 3D space simulator
Celestia simulates all kinds of celestial objects. From planets and their moons to groups of stars and galaxies, you will be able to observe any space object that is incorporated in the database.

To make matters worse, the position and movements of objects in the solar system are calculated in real time and extremely precisely on the scale of time and space you want.

An entire interactive planetarium
Celestia is perfect to use as a "planetarium" and to observe any celestial object.

You can easily navigate the universe and also discover the surface of the planets you visit.

Using Celestia, the software displays the exact positions of objects in the solar system in the sky.

With a powerful keyboard shortcut system, you can enable and disable annotations and other visual options live, or zoom back and forth to appreciate the details of an object and its surroundings, for example, observing the planet's moon system Jupiter.

Customize Celestia to your liking!
Celestia's catalog is very easy to customize. There are many extensions containing recently discovered objects, such as comets and stars, as well as new high-resolution textures of the Earth and all kinds of details.

There are also updates to get faithful 3D modeling of asteroids and spacecraft, including their trajectories accurately. All sorts of well-known items from the world of science fiction are available on Celestia!

Create your own worlds with Celestia
Celestia offers you the option to add your own content.

If you can't find an object in the extension catalogs, you can simply create and add it yourself. You can build a complete solar system, fantastic and spectacular nebulae, galaxies and also invented objects.

Celestia offers you a unique opportunity to demonstrate your creativity and creations in a completely interactive way.

Create your own music or add sound effects!
You can compose background music in your CEL / CELX script projects for sound effects worthy of the major science fiction studios. This option is available since version 1.7.0.

Faithful trajectories thanks to NASA
Celestia uses different types of data to determine the trajectories of celestial objects.

You can create the trajectory of a spacecraft yourself, or you can simply use NASA's database to find the trajectories of various objects and simulate them in Celestia.

Celestia is primarily an open source and educational project
This astronomy program displays the Hipparcos catalog with almost 120,000 stars.

In addition, it has at least 20 GB of extensions and updates available thanks to the Celestia community.

The greatest astronomy enthusiasts have always dreamed of being able to tour our entire universe at their leisure. Celestia offers this possibility thanks to OpenGL's three-dimensional modeling, which enables photographic quality to be achieved, whether you are looking at a small artificial satellite or an entire galaxy.

See the next solar eclipse in France
Celestia simulates the orbits of planets (and even exoplanets), dwarf planets, moons, asteroids, comets, artificial satellites, and spacecraft.

These trajectories are simulated thanks to Planetary Orbit Variations (or VSOP), which is still the most accurate method today.

In this way Celestia allows you to simulate and observe the next solar or lunar eclipse that happens in France.

Obviously, it must be clarified that you can observe solar eclipses but also lunar ones that occur from any point in the universe and at any time.

All the details that will allow you to comfortably travel through our universe
By using Celestia as planetary simulation software, you will have the opportunity to change the number of visible stars, but also to select different styles to represent all the celestial bodies.

You can visit our universe at a minimum speed of 0.0013 m / s up to millions of light years.

In the same way that happens in a video game, you can use the keyboard shortcuts to easily move around the simple and fun interface that the program has.

Different keyboard commands allow you, for example, to describe an orbit around a star, planet, moon, or other satellite, but they also serve to track space objects like asteroids and comets, or to walk around spiral galaxies or nebulae .

Incredible level of detail for a perfect 3D simulation of stunning outer space
In its use as a planetarium, Celestia shows the names and positions of all the celestial bodies, but also much more surprising details, such as the names of craters, observatories, valleys, landing platforms, continents, mountains, seas and oceans, and even cities. These options are valid both for Earth and for the details of other planets or moons.

To maximize the realism of this 3D space simulation, Celestia also offers you the opportunity to show or not the brightness that the planets reflect in the orbiting satellites, the atmospheres of the planets and the moons. This serves to appreciate beautiful sunsets and sunrises, planetary rings, eclipse shadows and even clouds.

You will also have additional information about the various celestial bodies, such as their radius, length, temperature and distance from the Sun. You can even observe several objects or celestial bodies at the same time by opening different windows in the program.

For the most expert users, Celestia is like the cinema!
With Celestia you can easily take screenshots and photos of your interstellar travels, you can also record real movies in high definition, either on Windows, Linux or Mac.

To automate the trips and reproduce them (if you use, for example, Celestia), you can trust the scripts that are administered in CEL (they are the simplest to give a linear sequence of instructions) or in CELX (based on the Lua language to create real applications within Celestia).

This is very handy as there are over 20GB of updates to incorporate into your scripts so you can add new content like new astronomical discoveries or active members of the Celestia community offering all sorts of plugins devised by themselves.

Celestia Updates: The Final Frontier!
Although the scientific use of Celestia is well established, its playful use is no less exceptional. Find all kinds of 3D models of science fiction objects such as:

For a more scientific use, the international community of Celestia users constantly provide updates that improve the precision of our world. Thanks to his great works, you will benefit from:

Relive the great moments of astronomy to learn much more!

If you can find the most historic spaceships in 3D, Celestia also allows you to track their flight paths with great precision. This way you will relive the great epic of space conquest with Sputnik 1, Voyager 2 and, of course, the SSI (International Space Station) station.

Another update also allows you to relive the Cassini-Huygens space mission, and another proposal allows you to rediscover man's first steps on the Moon as if you were there.

These extensions are educational and have been created mostly by teachers. For example, you can access over 40 hours of travel through our universe with astronomy lessons. Thus, you can discover:

A free multilingual program framed in an international project
Celestia is available in 27 different languages. No configuration is necessary, our software automatically detects the language of your operating system to install.

Because it is a free, open-source, multilingual program, the vast community of Celestia is populated by amateur and professional astronomers.

It is the community itself that continues to deliver exceptional quality content in areas we could not have imagined!

Any good Star Trek or Star Wars fan will delight in extensions of the same name when a professional astronomer edits Celestia scripts for advanced and hyper-realistic 3D simulations.

In short, Celestia is enjoying increasing popularity as part of the lineage of software such as Google Earth or NASA World Wind, since Celestia allows us to overcome the limits of our planet or our solar system to discover the universe in all its immensity.