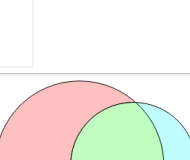 Venn Diagrams are very important to understand the set theory and are inevitable in subjects such as Math, Computer Sciences, Statistics. In order to create the same, the Free Venn Diagram Maker is an ideal choice. It is software that lets students and professionals to come up with accurate diagrams at all times and without much effort.

With Venn diagrams it is possible to represent the relationships of intersection, inclusion and disjunction without changing the relative position of the sets