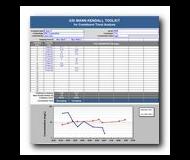 The GSI Mann-Kendall Toolkit is a free, simple, easy-to-use software tool to help environmental professionals efficiently conduct concentration trend analyses for any groundwater constituent.  Programmed in the Microsoft Excel spreadsheet environment, the software employs the same Mann-Kendall plume stability methodology that was previously developed for the MAROS software (Aziz et al., 2003; AFCEE, 2004).  This software tool can be used to demonstrate the plume stability condition (expanding, stable, or decreasing) and track the progress of remediation efforts, in a quantitative and consistent manner for consideration by both site managers and regulatory personnel.

Analysis of the trend of constituent concentrations in affected groundwater plumes has many applications in groundwater plume management and remediation.  Many regulatory programs require the demonstration of groundwater plume control or stability to confirm protective conditions.  Monitored Natural Attenuation (MNA) is increasingly being used as a remedy for cleanup actions at sites with affected soils and/or groundwater.  A primary line of evidence supporting MNA as a remedy is demonstration of a stable or shrinking plume condition, based upon historical monitoring data (ASTM 2004; USEPA 1999).  Evidence for the discontinuation of extraction-based remedies often includes demonstration of stable or shrinking plumes after shut-down of extraction systems.  Formal evaluation of plume stability can be accomplished using a variety of statistical methods, of which the Mann-Kendall protocol is one of the most commonly used and widely applicable tools.

GSI Mann-Kendall Features
The GSI Mann-Kendall Toolkit will give site personnel the capability for analyzing time-series groundwater monitoring data to quantitatively determine if the measured concentrations of a chemical are increasing, decreasing, or stable over time, based upon use of the Mann-Kendall statistical method.  The software can be applied to data from monitoring points for which groundwater sampling and testing have been conducted at multiple episodes over time (i.e., time-series sampling) to evaluate the concentration trend of each chemical at each monitoring location.