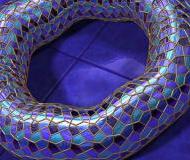 The Persistence of Vision Raytracer, or POV-Ray, is a ray tracing program which generates images from a text-based scene description, and is available for a variety of computer platforms. POV-Ray is free and open-source software with the source code available under the AGPLv3. Many methods for generating the 3-D models are used, including a companion program "moray" for interactive modeling.

POV-Ray is short for the Persistence of Vision Raytracer™, a tool for producing high-quality computer graphics. POV-Ray is Free Software (as per the definition of the Free Software Foundation) as its source code is licensed under the Affero General Public License (AGPL).

Without a doubt, POV-Ray is the worlds most popular raytracer. From our website alone we see several hundred thousand downloads per year, and this of course doesn't count the copies that are obtained from our mirror sites, other internet sites, on CD-ROM, or from persons sharing their copies.

The fact that it is free helps a lot in this area, of course, but there's more to it than that. There are quite a few other free raytracers and renderers available. What makes this program different ?

The answers are too numerous to detail in full here. Suffice it to say that POV-Ray has the right balance of power and versatility to satisfy extremely experienced and competent users, while at the same time not being so intimidating as to completely scare new users off.

Of course, the most important factor is image quality, and in the right hands, POV-Ray has it. We, the developers, have seen images that were rendered using our software that we at first thought were photographs - they were that realistic.

What is POV-Ray for Unix?
POV-Ray for Unix is essentially a version of the POV-Ray rendering engine prepared for running on a Unix or Unix-like operating system (such as GNU/Linux). It contains all the features of POV-Ray described in chapters 2 and 3 of the documentation, plus a few others specific to Unix and GNU/Linux systems. These additional features do not affect the core rendering code. They only make the program suitable for running under an Unix-based system, and provide the user with Unix-specific displaying capabilities. For instance, POV-Ray for Unix can use the X Window System to display the image it is rendering. On GNU/Linux machines, it can also display the image directly on the console screen using the SVGA library.

POV-Ray for Unix uses the same scheme as the other supported platforms to create ray-traced images. The POV-Ray input is platform-independant, as it is using text files (POV-Ray scripts) to describe the scene: camera, lights, and various objects. An extensive discussion of the POV-Ray Scene Description Language can be found elsewhere in this documentation.

And What Is It Not?
POV-Ray for Unix is not a modeler. It will not let you design scenes graphically on-screen. There are several shareware and freeware programs available for this purpose. To write or modify POV-Ray scenes you just edit the actual text file containing the commands.

New users might be surprised to learn that, although this sounds primitive, it is in fact one of the things that gives POV-Ray so much power and flexibility. There are many other rendering programs that give you a point-and-click interface, but when it comes down to absolute control of your scene, it's hard to beat a text-based scene description language (even though it's harder for some to learn).

Remember, though, that you do need to invest some time getting to know the program. For instance, you do not have to worry about most of the POV-Ray settings at first, but some of them are critical. Ignore them and POV-Ray for Unix may not do what you expect. The default settings have been selected so as to be satisfactory in the large majority of cases, but sometimes they will not give you what you want. Don't give up. The solution is bound to be a simple one, as long as you take the time to read the documentation. Investing a little bit of time getting to know the program will pay off - guaranteed!

As for experienced POV-Ray users, you will find that running POV-Ray in a Unix environment makes life much easier. Working under Unix means you can use editors and other powerful tools with which you may already be quite familiar. POV-Ray modes exist for popular text editors such as Emacs, and these provide many of the features found in the POV-Ray GUI interface on other platforms.