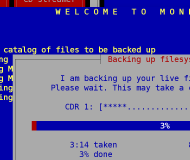 Mondo is reliable. It backs up your GNU/Linux server or workstation to tape, CD-R, CD-RW, DVD-R[W], DVD+R[W], NFS or hard disk partition. In the event of catastrophic data loss, you will be able to restore all of your data [or as much as you want], from bare metal if necessary. Mondo is in use by Lockheed-Martin, Nortel Networks, Siemens, HP, IBM, NASA's JPL, the US Dept of Agriculture, dozens of smaller companies, and tens of thousands of users.

Mondo is comprehensive. Mondo supports LVM 1/2, RAID, ext2, ext3, ext4, JFS, XFS, ReiserFS, VFAT, and can support additional filesystems easily: just e-mail the mailing list with your request. It supports software raid as well as most hardware raid controllers. It supports adjustments in disk geometry, including migration from non-RAID to RAID. It supports BIOS and UEFI boot modes. Mondo runs on all major Linux distributions (Fedora, RHEL, OpenSUSE, SLES, Mageia, Debian, Ubuntu, Gentoo) and is getting better all the time. You may even use it to backup non-Linux partitions, such as NTFS.

Mondo is free! It has been published under the GPL v2 (GNU Public License), partly to expose it to thousands of potential beta-testers but mostly as a contribution to the Linux community.