The free software for partitioning images and cloning 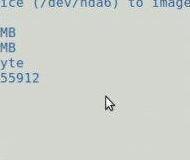 Partclone is a program similar to the well-known backup utility "Partition Image" a.k.a partimage. Partclone provides utilities to save and restore used blocks on a partition and is designed for higher compatibility of the file system by using existing libraries, e.g. e2fslibs is used to read and write the ext2 partition.

Features
Partclone provides utilities to back up and restore used-blocks of a partition and it is designed for higher compatibility of the file system by using existing library, e.g. e2fslibs is used to read and write the ext2 partition.

partclone screenshotThe goal of Partclone is to support most major file systems in the world. We spend much time to do this and continual develop for new file systame. Partclone is an image engine, not only to save the file system to an image or to restore an image to a partition, but also to clone devices. It also supports pipe, stdin and stdout which is helpful for advanced administrator to script special features via partclone utilities. For rescue situation, the rescue mode of Partclone would try to skip bad blocks and backup all good blocks for the partitions. The ddrescue program is another better solution to save bad disk while with partclone's help by listing all used blocks as domain file, it could make ddrescue smarter and faster when dumping a partition. All Partclone commands are in text mode and ncurses interface. If you prefer to save more resource, quiet mode could be used. All backup blocks will be vertified by crc32 to make sure the data are correct. You could check the usage docs to get more information.