Free program for the design of publications. Tools for creating magazines or posters

Welcome to Scribus, a page layout program for Linux, FreeBSD, PC-BSD, NetBSD, OpenBSD, Solaris, OpenIndiana, Debian GNU/Hurd, Mac OS X, OS/2 Warp 4, eComStation, Haiku and Windows. Since its humble beginning in the spring of 2001, Scribus has evolved into one of the premier Open Source desktop applications. Encouraged by professionals and beginners alike, the Scribus Team, with support from a large and growing number of enthusiastic contributors from all over the world, is dedicated to develop and improve “one of the most powerful and useful open-source projects out there” (TechRepublic). Underneath a user-friendly interface, Scribus supports professional publishing features, such as CMYK colors, spot colors, ICC color management and versatile PDF creation. Scribus has many unexpected touches, such as powerful vector drawing tools, support for a huge number of file types via import/export filters, emulation of color blindness or the rendering of markup languages like LaTeX or Lilypond inside Scribus. The Scribus file format is XML-based and open. Unlike proprietary binary file formats, even damaged documents can be recovered with a simple text editor – sometimes a challenging …

Scribus is a page layout program licensed as free software, which offers great performance in computer publishing, available in 24 languages. Scribus is developed with the Qt development library and available in versions for operating systems such as GNU / Linux, Unix, Mac OS X and Windows. It provides design and layout capabilities similar to those offered by commercial programs such as Adobe PageMaker, QuarkXPress, and Adobe InDesign. Among its most relevant features, Scribus supports most of the major graphics formats, in addition to SVG, font and image management, CMYK color manipulation, and ICC color management. Used to print PostScript Level 3, including support for TrueType, Type 1, and OpenType fonts. The driver fully supports PostScript Level 2 constructs and a large subset of Level 3 constructs.

Scribus offers the ability to prepare files for professional imaging equipment. You can also create animated and interactive PDF presentations and forms. Examples of its application include newspapers, brochures, newsletters, posters and books.

Scribus supports most of the major graphic formats in addition to SVG. Its professional features for typographic fonts and images include color management based on the CMYK subtractive color model, color management, and the ICC specification.

Printing is done using its own internal PostScript Level 3 drivers, including support for embedded fonts and adjustments with TrueType, Type 1 and OpenType fonts. The internal controller fully supports PostScript Level 2 constructs and a large subset of Level 3 constructs.

The format of your files is XML based and fully documented. OpenDocument document texts can be imported, such as RTF, Microsoft Word Doc, and HTML (although with some limitations). 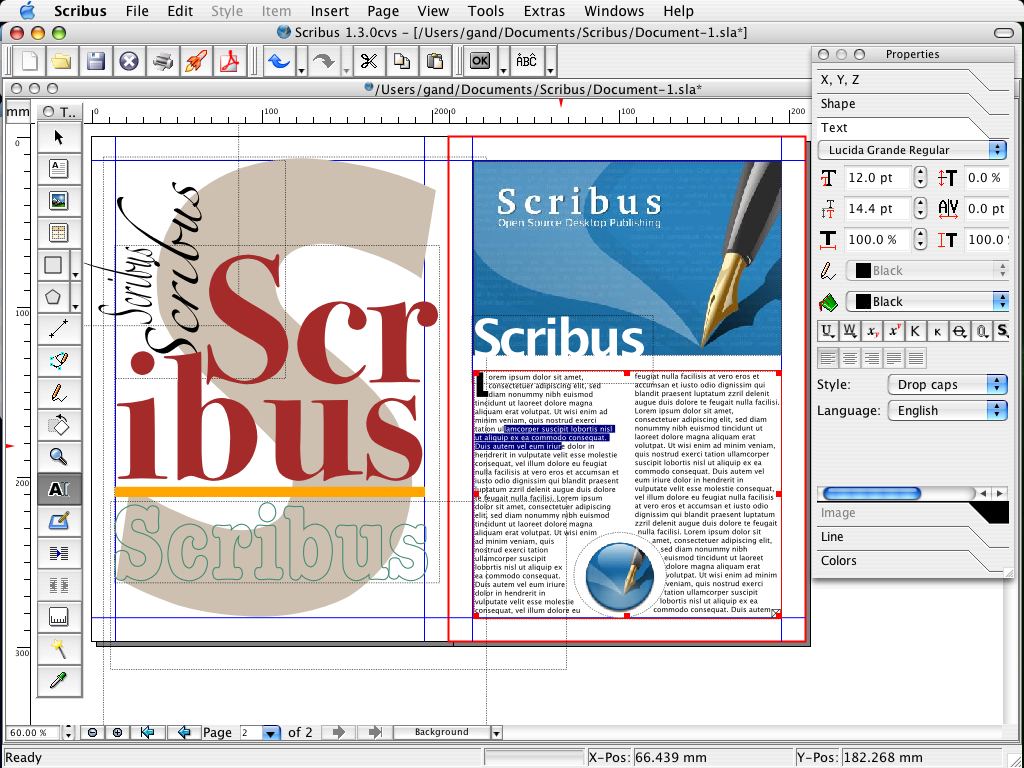 Why on earth should I use Scribus?

Because it’s reliable and Free. Free really means Free with an uppercase F. Free is more than just gratis (which is just a side-effect). It means that you are in control of your data and, if you wish, the code of your desktop publishing tool. That’s what smart individuals and companies prefer.