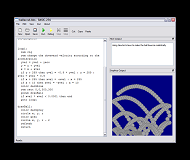 BASIC-256 is a simple version of BASIC designed to teach programming using classic control structures like gosub, for / next and goto, and also includes a graphical mode. Before November 2006 this program was called KidBASIC.

BASIC-256 is an easy-to-use version of BASIC specifically designed to teach anyone (especially middle and high school students) the basics of computer programming. It uses traditional control structures like gosub, for / next, and goto, which helps children easily see how the program's flow control works. It has a built-in graph mode that lets you draw images on the screen in minutes, and a set of detailed, easy-to-follow tutorials that introduce programming concepts through fun exercises.

BASIC-256 is a programming language that can be used to write your own computer programs. These tutorials will help you how, step by step.

A computer program is a set of instructions that a computer tells you what to do. The computer reads the instructions one by one, and does exactly what they say.

Time to mature and get rid of the idea that programming is difficult and can only be learned by those who spend hours at the computer and have the entire collection of Star Wars movies. Complicated and challenging as any learning of a new way of thinking and building can be, programming today has many didactic and pedagogical methods to learn from your home, without having to go to study at an institute or decipher the codes alone in the light of the candles One of the programs that makes learning easier is BASIC-256, which is presented as a suite of exercises for the front view and how a basic program works.

BASIC-256 programs consist of a series of instructions, separated on separate lines, that are executed in the order in which they appear.

BASIC-256, a book to teach ANYONE how to program a computer.
The original vision for this book was to create a practical introduction to computer programming for middle and high school students. It has been written without much of the jargon and complexity of many programming books and will be suitable for anyone 10+ who wants to learn to code and is ready to experiment.

Programming a computer is seen by many as a task beyond the typical middle-grade student. I personally know this is not the case because I learned how to program my TRS-80 home computer during those years of my life. The programming was different: simpler because we didn't have to worry about hard drives, color, or graphics; and more difficult for the same reasons.

This book tries to get involved through programming means (sound, color, shapes and text to speech) and then work on typical programming concepts (loops, conditions, variables ...) to make fun animations, games and applications. The complete source code for the sample programs is provided so that experimentation can really hone the skills learned.

Recent updates to the book include: sprites, classification, stacks, queues, and linked lists.

Basic 256 games and other fun programs
A collection of games and other programs written in BASIC-256 for you to see, learn, and change. Don't just play a game, make it yours. P0wn the game.