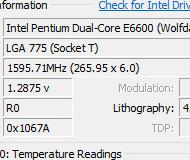 Core Temp is a compact, simple, small, and powerful program for monitoring processor temperature and other vital information.

What makes Core Temp unique is the way it works. It is capable of displaying the temperature of each individual core of each processor in your system!
You can see the temperature fluctuations in real time with different workloads. Core Temp is also independent of the motherboard.

All major processor manufacturers have implemented a "DTS" (Digital Thermal Sensor) in their products. The DTS provides higher resolution and more accurate temperature readings than conventional integrated thermal sensors.
This Core Temp feature is supported on all recent x86 processors. Intel, AMD and VIA processors are supported. A full list of supported processors is available.

Core Temp is easy to use, while allowing a high level of customization and expandability.
Core Temp provides a platform for plugins, which allows developers to add new features and extend their functionality. You can find our plugins and plugins here.
If you are a developer and interested in creating your own addition, check out the developer page.

How does Core Temp work?

Core Temp makes it easy for you to control the temperature of any modern x86-based processor. The program supports processors from the three main manufacturers; Intel, AMD and VIA.

Temperature readings in Core Temp are very accurate as the data is collected directly from a digital thermal sensor (or DTS) that is located on each individual processing core *, near the hottest part. This sensor is digital, which means that it does not depend on an external circuit located on the motherboard to report the temperature, its value is stored in a special register in the processor so that the software can access and read it. This eliminates any inaccuracies that external circuitry and sensors on the motherboard may introduce.

This is how the Core Temp program works:

Intel defines a certain Tjunction temperature for the processor. This value is typically in the range between 85 ° C and 105 ° C. In later generation processors, starting with Nehalem, the exact value of Tjunction Max is available for the software to read from an MSR (short for Model Specific Register. ).
A different MSR contains the temperature data. Data is represented as a Delta in ° C between the current temperature and the T function.

AMD processors report temperature through a special register on the north bridge of the CPU. Core Temp reads the value from the registry and uses a formula provided by AMD to calculate the current temperature.
The formula for the Athlon 64 series, early Opterons and Semprons (K8 architecture) is: 'Core Temp = Value - 49'.
For the newer generation of AMD processors such as the newer Phenom, Phenom II, Athlons, Semprons and Opterons (K10 architecture and later), and their derivatives, there is a different formula: 'CPU Temp * = Value / 8'.

* CPU Temp is because the Phenom \ Opteron (K10) only has one sensor per pack, which means there is only one read per processor.

VIA processors are capable of reporting the temperature of each core. The thermal sensor provides an absolute value of temperature in degrees Celsius, no conversion or manipulation is necessary.

The Tjunction or TjMax temperature on VIA chips is usually between 70 and 90 ° C. 90C for the mobile and low-power versions and 70C is for the desktop variants.

Core Temp goes mobile!
Have you ever wished you could keep an eye on your systems while away from home or in the office?
If you have an Android or Windows Phone device, now you can! Click here for more information.
Core Temp Gadget and Windows Media Center Plugin for Windows 7 and Vista with Core Temp:
Recently, I released a new version of the Core Temp Gadget, completely revised.
The new version includes a graphical view, which lists the processor load or temperature, as well as memory utilization.
The readings are now color-coded and can be adjusted by the user from the Options screen. Among these enhancements, the gadget can be resized and the information text about the readings can be hidden if desired.
You can download Core Temp Gadget and CoreTempMC from Plugins page.

CoreTempMC is a Windows Media Center plug-in for Windows 7 and Vista. Allows you to view Core Temp information directly from the Media Center interface using your remote control. In addition, it also shows memory utilization.