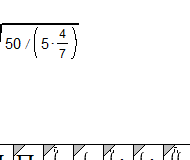 Math-o-mir is a formula editor, but also much more than that. With this software you can type your math as quickly and capably as if you are using a pencil and a sheet of paper.
The idea to make a program that is capable to replace pencil and paper when doing mathematics did ask for some unusual solutions. Not surprisingly, because for centuries the math notation evolved to harmonize with the pencil exclusively...

Has it ever happened to you that you had to turn in some work with a complex printed equation, and lost your sanity looking for the necessary symbols between ASCII tables and the Windows Character Map, only to end up applying the last touches with a pencil? Well, with Math-o-mir, the odyssey of writing mathematical equations becomes much less obnoxious. In addition to possessing a large number of symbols, it is completely free, so if you have to deal with equations on a daily basis, maybe you should give it a try.

Some equations can be truly complex, not only to understand, but also to write. Some of the symbols appear to be straight out of a twisted nightmare by H.R. Giger, but worst of all, as flexible and powerful computers have become today, writing something as seemingly simple as the square root symbol involves a visit to the Character Map, a tedious task when there is have to deal with multiple equations. As if that were not enough, you also have to battle with the size of the symbols, which ends up breaking the user's mental health. To avoid this, the best way to survive an equation on a computer is with a mix between writing and drawing. Math-o-mir is an application that allows you to do both at the same time, on the same document.

The number of symbols available is significant, many of which are not directly present on the keyboard. Instead of fighting with the Character Map, you just have to expand the selection menu for each symbol (the little gray arrow) and find the one you need. You can resize, add page splits, underline, cross out, circle, and even use a grid to position the equations in an aligned way. We must admit that Math-o-mir is not as intuitive as it seems. The best thing to do is to open the example equation and study all the possibilities offered there. Graphics and features are within Math-o-mir's capabilities, though you'll need to spend time with it before you can fully master it. The reward is to leave out any auxiliary tools, not to mention the fact that you don't have to use an image editor to create a square root that covers the entire equation.

The tool is completely free, its installer is very small, and it is compatible with Windows 7. You can also send to print directly from Math-o-mir, but we believe that the most logical thing would be to write the equations there, and then export them to be inserted in a final document. To achieve this effect, you only have to choose the equation within the program, and copy it in image format to the clipboard (something that many know as "convert to curves"). The rest depends on your needs. Word, PDF, Excel, and many other formats will be able to receive the equation written in Math-o-mir. There are probably professional tools that are even more flexible, but between the free and the light, Math-o-mir stands out in its own right.