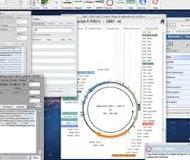 Serial Cloner has been developed to provide a light yet powerful molecular biology software to its users.

Serial Cloner has been developed to provide a light yet powerful molecular biology software to both Macintosh and Windows users. A Linux version is also distributed. Serial Cloner reads and write DNA Strider-compatible files and import and export files in the universal FASTA format. Serial Cloner also import files saved in the Vector NTI, MacVector, ApE, DNAstar, pDRAW32 and GenBank formats. Import from VectorNTI multi-file format is also supported. Powerful graphical display tools and simple interfaces help the analysis and construction steps in a very intuitive way. Serial Cloner 2.5, handles Annotations and Features both in the sequence and in the Graphic Map and can automatically scan for sequence Features.

All the tools you need to analyze and manipulate your sequences are available in an all-in-one-window concept. Numerically select fragments, find restriction sites, ORF or  any nucleotide or peptide sequence, calculate Tm of selected fragments, %GC or dynamically determine the translation your selection into peptide and calculate the MW using a compact interface.

Serial Cloner also lets you build text restriction map and quickly format it to add multi-frame translation or only show single cutters for example. Since version 2.1, Sequence Features are visible in the Sequence Map.

The graphic map of Serial Cloner is really Graphic as you can easily select and extract a fragment or show single, double or multiple cutter all in the same window. All the features are displayed on the map using user-modifiable colors; the features can be manually entered, imported from GenBank or automatically found after scanning by Serial Cloner. The Collection of Features to be scanned for can be defined and modified by the user, imported and exported.

Clone in a few clicks:

Serial Cloner will assist you in setting-up new sub-cloning projects and in preparing the electronic versions of your constructs.

In addition to the classical restriction maps - both graphic and text-based - or site usage windows, you will be able to quickly extract a sub-sequence either in a selection or between restriction sites, to create a new PCR-based fragment or synthetic adaptors. shRNA constructions based on pre-defined scaffolds are also automated. Finally, you can assemble fragments, obtained by PCR, adaptor/shRNA synthesis or simply by graphically selecting fragments between restriction sites. Just select, blunt if you need, and click the Ligate button. An additional interface allows easy Gateway(tm) cloning for both BP and LR reactions. Finally, Serial Cloner provides an interface to align two sequences using a local algorithm or the BLAST2Seq NCBI server.  Features are now visible when aligning locally. You will also find a Restriction Enzyme library management interface,  Additional tools, like a web browser for direct import of NCBI and EMBL entries, a virtual cutter to prepare restriction analysis or a silent restriction map generator to find how to introduce restriction sites without modifying the translated peptide are also provided. It is also posible to send directly BLAST request at the NCBI and obtain the result  inside a Web interface. Serial Cloner 2.5 now allows to import codon frequency tables from the internet using a Web interface. It also allows to generate sense and antisense sequences to be obtained after bi-sulfite conversion.