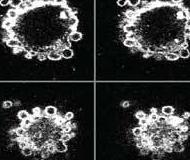 What is BioImageXD?
BioImageXD is a free open source software package for analyzing, processing and visualizing multi-dimensional microscopy images. It's a collaborative project, designed and developed by microscopists, cell biologists and software engineers from the Universities of Jyväskylä and Turku in Finland, Max Planck Institute CBG in Dresden, Germany and collaborators worldwide. BioImageXD was published in the July 2012 issue of Nature Methods.

Implementation
BioImageXD is written in Python and C++, using wxPython for the GUI, and leverages the power of the Visualization Toolkit (VTK) for multi-dimensional image processing and 3D rendering. BioImageXD also uses the Insight Segmentation and Registration Toolkit (ITK) for segmentation and other image processing tasks. BioImageXD works on Linux (or theoretically any UNIX-like OS with wxPython, VTK and ITK), Mac OS X 10.6/10.7, and Windows XP, Vista and 7. Both 32-bit and 64-bit versions are available. The first beta version of BioImageXD was released in February 2006, and version 1.0 in July 2012.

BioImageXD main features
BioImageXD is a multi-purpose post-processing tool for bioimaging. The software can be used for simple visualization of multi-channel temporal image stacks to complex 3D rendering of multiple channels at once. Animations of 3D renderings can be easily created using virtual camera flying paths or key-frames. Image processing tools include deconvolution, registration and tens of tools for mathematical and logical processing and noise reduction. Analysis tools cover both object-based and voxel-based approaches, with for instance versatile tools for colocalization analysis, numerous segmentation methods with elaborate numerical analyses, and an advanced motion tracking algorithm. All processing and analysis methods can be built into pipelines and run for hundreds of datasets at once with the Batch Processor, and simulated image data can be created for method validation. BioImageXD features an intuitive graphical user interface, designed to enable accurate scientific quality and control, and image processing in high throughput.