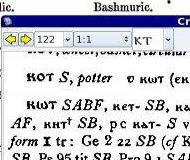 Marcion is a software forming a study environment of ancient languages (esp. Coptic, Greek, Latin) and providing many tools and resources (dictionaties, grammars, texts). Although Marcion is focused on to study the gnosticism and early christianity, it is an universal library working with various file formats and allowing to collect, organize and backup texts of any kind.