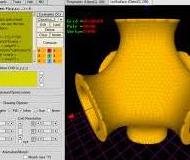 K3DSurf is a program to visualize and manipulate Multidimensional surfaces by using Mathematical equations. It's also a "Modeler" for POV-Ray in the area of parametric/iso surfaces.

K3DSurf can be used by every one interested in 3D Mathematical drawing functions and don't require any special competences by users. Most of the work was done with the intention to make K3DSurf as simple as possible but without any harm of it's efficiency:

Creating equations to represent specific shapes can be somewhat tricky and require experiences in both Mathematic field and 3D programing but the most "experience demanding", I think, is the creation of specific equations with specific behaviors when rotating in Hyperspace (4D/5D).

K3DSurf Overview
Parametric Surface/curve :
K3DSurf use parametric descriptions of it's physical models. The parametric method of representing surfaces/curves uses a function to map some portion of R2 (the domain) to a patch of the surface in R3.
Because any position in the plane, and thus any position on the surface patch, can be uniquely given by two coordinates, the surface is said to be parameterized by those coordinates.
Parametric equations can be either “Implicit” or “Explicit”:
** Explicit equations:
In an explicit equations, x, y, and z are each given by separate functions of parameters u and v.
Example: X =u, Y = u+v, Z = cos(u+v)
** Implicit equations: Right now, only implicit equations like Z^n = f(X,Y) with (n mod 2 = 1) are supported by K3DSurf.
Example: Z = exp(x^2 + y^2), Z^7 = exp(x*cos(y))...