A free, fast and accurate routine to compute the position of the Sun 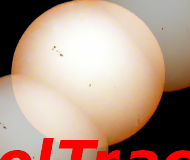 SolTrack is a simple, free, fast and accurate C/C++ routine to compute the position of the Sun. The code can be used to track the Sun on low-specs machine, such as a PLC or a microcontroller, and can be used for e.g. (highly) concentrated (photovoltaic) solar power. SolTrack has been developed by Marc van der Sluys, Paul van Kan and Jurgen Reintjes, of the Lectorate of Sustainable Energy at the HAN University of Applied Sciences in Arnhem, The Netherlands. The code is based on the astronomical Fortran library libTheSky and can be used, modified and distributed under the conditions of version 3 of the GNU Public Licence.