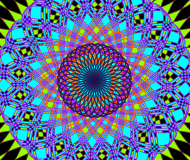 This interesting program is absolute fun because of its ease of use and powerful features that allow you to create astonishingly beautiful Spirograph patterns with no effort.

Online Spirograph
Math can be fun and here's the proof - Spirograph!
Over the past many years, a lot of people used and enjoyed our windows desktop based Spirograph application. But those who were not using a windows PC were disappointed not to be able to run this cool application. So, we decided to remove the dependency on a certain OS by creating an online version, which can be used on any device running a modern browser be that Mac, Linux or MS Windows. It can even be run on mobile phones and tablets!

Another cool thing is that we did not just create an online version, we created a better version, which is easier to use and understand. We have also made it very simple for you to clone existing spirograph patterns, share the new ones you create and also created an online gallery where you can view spirograph art created by the community and vote for the ones you like!

Spirograph to SVG (Spiro2SVG)
One of our friends has done a wonderful job by creating an SVG exporter for many Spirograph applications including Mathiversity's desktop spirograph software. This beutiful exporter is a real treat for the lovers of sprigraph and roulette patterns.

The Math Behind the Spirograph Toy
Read a most amusing essay by Chiron (one of our very kind users) that explains the workings of the Sprigoraph toy in a way that was never done before! No lucky visitor will miss reading it.