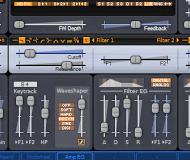 Surge is the best free synthesizer plugin. It can work as a VST, AU, or LV2 plugin in any compatible digital audio workstation on Windows, macOS, and Linux. Surge is a subtractive hybrid synthesizer with three oscillators per voice and eight oscillator algorithms (Classic, Sine, Wavetable, Window, FM2, FM3, S/H Noise, and Audio input). Experienced music producers will enjoy Surge’s almost infinitely powerful synthesis engine. Beginners, on the other hand, can take full advantage of over 1,000 sound presets that come included with Surge.

If you need a flexible free synthesizer for your music production studio, Surge is the way to go. It is one of the best free music software tools on the market, especially for electronic music producers. Surge was developed by the same programmer who later worked on developing the Bitwig Studio music production software. The plugin is now an open-source virtual instrument developed by a group of enthusiasts.